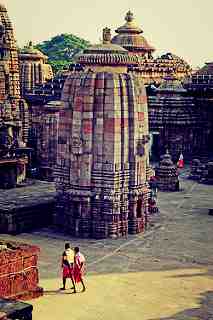 Note: Especially in Lingaraj temple non Hindus are not allowed so one can visit the this particular temple on top of platform only.

Meet the One of the colorful tribe of Northen orissa at their very isolated village in Kapilash jungle zone. warm welcome by the village chief / Excursion their life style.

PM-  proceed to Joranda Mahima religion live monastery and enjoy the unique pattern of worship during sun set by the Mahima sadhus (The supreme sadhus use only lean bark to covering their lower part).

Excursion the ancient Budhist University at Ratnagiri and Udaygiri (where it had been practicing the study since 1st c AD to 12th c AD). Also visit the rock cut stupa at langudi.

Overnight relax a nice hotel on beach at Gopalpur

Take the ferry from another part of Chilika Lake (from Parikud side) . While crossing the grand chilika lake meet the Irrawaddy dolphin on nature.

Puri: is a holy town – on the coast of Bay of Bengal, famous for Jagannath temple and cultural activities. Still today people believe it’s a cultural capital of Orissa.

Early stand up and visit the classic part of Puri by cycle rickshaw trip such as cremation place( swargadwar), old pond, bit walking on old street , marshal art place and also Jagannath temple( non Hindus are not allowed in it , so non hindus  will see beauty of temple while hiking around the outer part of temple ).

Village tour is very special of coastal area, such as bramin village, coconut picker village, farmer village, pottery making village, artisan village etc. Hiking their village, meet with the people excursion the activities of local, meet the artisan and their “Gurukul”: where student practicing the traditional art and classical dance form in the guidance of teacher (guru).

Afternoon visit the world famous sun temple at Konark- excursion the language of stone on 13th c AD. If time permit see the illumination of temple.

Bhubaneswar , the capital city of modern Odisha. The Great Kalinga War which led to the miraculous transformation of Emperor Ashoka was fought along the bank of river Daya on the outskirts of Bhubaneswar in 261 B.C. Now there stands a Peace Pagoda with the Ashokan rock-edicts. The city also has the oldest rock-cut caves in Khandagiri and Udayagiri.
Teeming with temples reflecting the evolution of Kalinga architecture from inception to maturity, Bhubaneswar has earned the title of Temple City of India. Parsurameswar (7 c. AD), Vaital (8c AD), Mukteswar ( 9th c AD), Sidheswar (10 c AD), Rajarani, Brahmeswar and Lingaraj (11c AD) are a few of the temples which stand as examples of the architectural excellence of Oriya sculptors.

(60km from Bhubaneswar), Famous in the world as Jagannath Dham, seat of the Lord of the Universe. It is one of the major pilgrim centres of Hindus and has the 12th century Temple and shrine of Lord Jagannath, which is one of the finest specimens of Odishan architecture. Deeply set in the religious sentiments of the Hindus, the 66 mtr. High shrine is not just a piece of wonderful architecture, rather the embodiment of the faith of millions of devotees. Though this temple is closed for the non-Hindus. Jagannath and Jagannath culture incites the inquisitiveness of many and is widely studied by scholars across the world.
The golden beach of puri with  the typical culture and heritage of real india attract many visitors’ to Puri.

Konark, a world Heritage Site (65km from Bhubaneswar; 40km from Puri), The artistic, military, religious, social and domestic aspects of 13th century Odisha are beautifully chronicled in stone at Konark, having derived its name from Kona meaning Corner and Arka meaning Sun, also named as Akrakshetra. Built by King Narasimhadeva, brilliant example of the fine skills of the then Odiya architects.
The dancing figures in various poses (Mudras) are gracefully carved to create a mesmerizing treat for the eyes, one of those rare monuments of the world.
The Sun Temple:”  Here the Language of stone surpasses the language of man”, thus said Rabindranath Tagore describing the beauty of Konark. “ Had Konark been discovered first and the Taj Mahal at Agra later by the Europeans, then there is no doubt that Taj would have taken a second place in the mind of world”, remarked the noted Art Historian Charles Fabri.

Gopalpur (190 km distance from Bhubaneswar; 20 km from Berhempur) is one of the finest white sand beach in Odisha. Early morning the sunrise on beach with the activities of fishermen offer the magnetic attraction to Gopalpur. Nearby the great tanta pitha- Bhairabi and one of the 52 sakti pitha at Taratarini attract many religious devotee to hear. Patia sonpur beach also very unique nearby to Gopalpur.

Archaeologists have unearthed scores of Buddhist relics in the monastic ruins discovered in Lalitgiri( 110km from Bhubaneswar). The hills and the neighbouring hills like kayam and Langudi etc. are believed to have been the site of a huge university complex pertaining to the Buddhist origin.
A series of brick pagodas, stone porches, prayer halls and Buddhist images have surfaced at Lalitgiri, while at Ratnagiri the finds have been the richest in terms of cultural treasures-two large monasteries, a huge stupa, Buddhist shrines and numerous sculptures are witness to the strong influence of Buddhism in this region. It was also a great centre for Tantric Buddhism or Vajrayana art and philosophy in the 8-9th century.
The udayagiri ruins have recently brought to light the ancient name of the monastery as Madhavapura Mahavihara, Maha stupa with pancha dyani Buddha and several Buddhist sculptures. The site still holds plenty ofmysteries and for the intrepid tourist.

Asia’s largest brackish water estuarine lake, Chilika sprawls over an area of 1100 sq km covering parts of three districts of Odisha i.e. Puri, Khurda and Ganjam. This lake is one among the state’s major tourist attractions and has remained a favourite destination for tourists from across the world. Bird-watchers or nature-lovers, young or old, Chilika has a lot to offer to everyone. The rich bio-diversity and socio-economic importance of Chilika has earned it the status of a Ramsar site. Winter is the best time to visit Chilika as over 160 species of migratory birds flock the islands during this time of the year. The birds come from as far as the Caspian Sea, Lake Baikal, Aral sea, Central and South East Asia, Ladakh and the Himalayas.
Besides the vast congregation of migratory birds, the limitless blue stretch of water, the beautiful virgin beaches separating the sea and the lagoon, the islands with rich lora aand fauna and the playful dolphins add more charm to the beauty of this place.

One of the ancient city in western Odisha was the main centre of Dakhina Kosal. Famous for its nice double ikat textile pattern called “Samalpuri”. Sambalpur  also famous for its smbalpuri dance and music. People beg blessing from the elders and celebrate their  annual festival Nuakhai, to offer the prime crops of the year at the main goddess of samblapur-“  Sambaleswari”.  Usally people called Maa Samalei.

Note; Our each and every suggested tailor-made  itinerary has different than others’ for exclusive Jagannath Puri Darshan or Sakti Worship tour , please visit Domestic / Religious Tour page in our site.