Early stand up to explore the ancient jain temple at the eastern group of monument at Khajuraho and then departure for Bhopal and after long drive check in a nice palace hotel at Bhopal . (while long drive visit some of the ethenic Bhil tribe peoples’ village).

Morning visit the world famous Sanchi stupa ( world heritage site) , The great Stupa of Sanchi, built by emperor Ashok , has become an icon of India’s cultural heritage. it is the most famous of a host of stupas, monasteries, temples and pillars on this hill, dating from the 3rd c BC to the 12th c AD. Then drive to Udaygiri rock cut cave (5th c AD, Gupta period where special attraction is the legend story of god vishnu’s 3rd incarnation- Varaha depict there very clearly. Return back hotel , lunch and then after noon visit the city sightseeing of Bhopal. Bhopal: it’s ancient name was Bhojpal ( Raja Bhoj of 12 c AD ruled over here ) in early 18th C AD it concord by Dost Mohammad and he ruled here 32 year so many muslim monument found on the old part of city. So during you excursion on the old part of city visit the Taj-ul-hawk mosque ( one of the largest mosque in India) , Jama masjid, Moti masjid and Gohar mahal in chowk area. Overnight at the same hotel.

Morning drive towards Ujjain , check in a clean comfort hotel at there and afternoon visit the Mahakeleswar temple , Bade Ganesh Jee temple and early evening join the holy arati of river shipra then return back to hotel.

Morning after breakfast drive towards to Mandu. Upon arrival at there check in a nice hotel on the side of lake. Afternoon visit the eco point and Baz Bahadur and Rani Roopmati palace. Mandu:- the erstwhile fort capital of the Parmara rulers of Malwa. Mandu was renamed shadiabad, “the city of Joy”, by the sultan of Malwa at the end of the 13th century. It embodies the love of the poet-prince Baz Bahadur for his beautiful consort Rani Roopmati; her pavilion. Under mughals, Mandu became a pleasure resort,with its many lakes and palaces.

Morning explore the city of joy again, to visit the famous Jahaz mahal( The palace like ship) and hindola Mahal, as well as ornamental canals, bath and pavilions. Jami Masjid, and Hoshang Shah’s Tomb, which provided inspiration to the builders of the Taj Mahal with in the royal enclosure, afternoon visit the champa Baoli, Dilawar Khan’s Mosque, Nahar Jharokha, Gada Shah’s shop and house, and taveli Mahal and also ashrafi Mahal, hati Mahal and Dariya Khan’s Tomb etc.

Departure for Omkareswar : a riverine island at the confluence of the Narmada and the Cauvery, Omkareswar is renowned for its medieval Brahmanic temples. This tiny island consists of two hills and a valley, throught to resemble the Hindu symbol “ om”. The exquisitely carved shri Omkar Mandhata temple on the island houses on of the twelve Jyotirlingas. Visit also Siddhanath Temple of 10th c AD. The 24 avatars, a cluster of Jain Temples and the Satmatrika temples. Then drive towards Maheswar. Check in a nice Ahalyabai palace afternoon visit the Rehwa weavers’ society.

Maheswar:-Located on teh banks of the Narmada river,Maheshwar was identified as “ Mahesmati”an important cultural centre during Ramayana and Mahabharat . the town was resored to its pre eminent position in the 18th century by the revered Holkar queen, Rani Ahilyabai of Indore. The town’s 1.5 km-long riverfront is renowned for its bathing ghats and rows of pretty, tiered temples. Morning while boating on the river Narmada , view the activities on the river ghat. Visit the Maheswar and kaleshwara, Rajarajeshwara , Ahileshwar temple then after lunch drive towards indore to board the night train for Jabalpur.

Upon arrival Jabalpur check in hotel at Bhedaghat on the bank of river Narmada. Jabalpur:- Pleasure resort and 12th century capital of the Gond kings and later the seat of the Kalchuri dynesty. Morning boat ride on Bhedaghat: Soaring in glittering splendour , the Marble Rocks at Bhedaghat rise to a hundred feet on either side of the Narmada as it flows through a narrow gorge. Also visit the stunning Dhuandhar Falls and the Chausath Yogini Temple. Overnight relax at the same hotel at there.

Departure for Kanha , check in a nice clean and comfort jungle resort at there. Afternoon visit the gond tribe village near entry point of the buffer zone. Kanha: Tiger –spotting is virtually guaranteed at Kanha as it has the highest number tiger in India. Vividly portrayed in Kipling’s Jungle Book, its sal forests, grasslands and streams are the haunt of the majestic tiger. Fauna includes leopard, gaur, barking deer, black buck, the rare hard ground barasingha and over two hundred avian species and many more.

Meet the wild tiger and also other herbivorous on nature while jeep safari in the early morning and afternoon ( regarding the jeep safari ,which is previously booked by us . our guide will proper inform to you). Overnight in the same resort.

Morning again one jeep safari in the core zone of Kanha. Then after lunch drive to Bharamdeo ( chhatishgarh state), enroute visit one of the colourful tribe of chhatishgarh- Baiga at their village. Then check in a nice resort at Bharmdeo and relax. Bharamdeo: one of the nice cultural heritage place of chhatishgarh on the velly of Maikal hill, famous for its Bharamdeo temple-11th c AD ( famously known as the Khajuraho of chhatishgarh).

Morning visit the Bharmadeo temple nearby and then strait drive to Barnawapara wild life sanctuary via: Siripur. Siripur: once the capital of Dakhin Kosal and rulled by kalchuri, parmar dynesty etc during Gupta period and post gupta period this region was culturally highly developed by these dynesty so during their period Budhist and hindu monastery developed in these region. Visit the group of monastery , surang tolla, kuti vihar etc also visit the only brick temple of central india- Lakhanath temple-6 c AD, Ancient market yard palce etc at there then drive towards Barnawapara wild life sanctuary – check in a nice jungle resort at there and relax on bon fire.

Meet the wild life such as leopard, barasinga, parquipine, barking deer , spotted deer and many more while early morning and afternoon jeep safari( regarding time please consult with you guide in advance).

Morning breakfast at the wild bird watch riverside on nature. After lunch or accordingly your time checkout and departure for Raipur airport for your onwards journey.
Tour concludes: 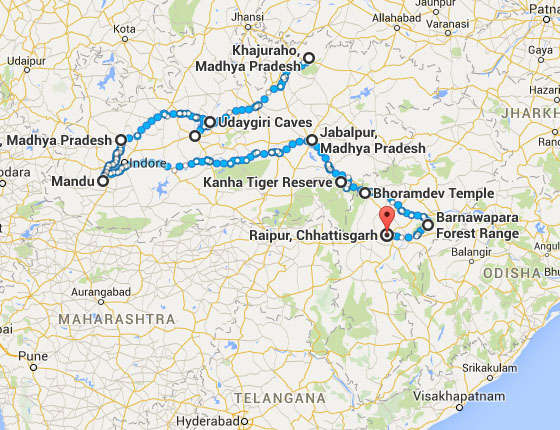