A World Heritage Site( 46kms from Bhopal via Diwnganj), Sanchi is known for its stupas, monasteries, temples and Pillars dating from the 3rd century B.C. to the 12th century A.D. The Sanchi stupa was originally buit by the Mauryan Emperor Ashoka.

A Chunar Sandstone pillar fragment, shining with proverbial Mauryan polish, lies near Stupa 1 and carries the famous edict of Emperor Ahsoka’s warning against schism in the Buddhist community. The four gateways of the Stupa built in the 1st c B.C. with stories of Buddha’s past and present carved on them are the finest specimens of early classical art.
The adjacent town of Vidisha and the 5th c A.D. Udaygiri Caves are also well worth a visit.

Upon arrival meet our representative and transfer to hotel and check in. 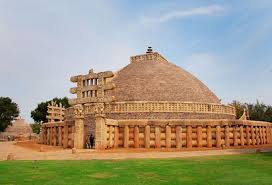 Morning departure for airport to your onwards journey.